NOTE: This is not a curse, but a banishing spell. The purpose is not to get revenge on someone you hate, but to make it so they can no longer send you negativity. It is a protection spell. A Magician should not be swayed by emotion, but it can be hard to stay calm while being bombarded by negativity, but if we succumb to it, we pull ourselves down to their the level of vain ignorance and despair. This is to cut them off from you, so they stop dumping it on you.

Right, time for a spell to bind all that pesky negativity someone is sending you, or to get them out of your life for good.

I’m a ceremonial magician, and this is a wiccan spell. I normally don’t use witchcraft, but there’s a lot of really cool, quick and nifty little  spells they have, so i’m always interested in using them. The ceremonial magick protection methods are either simple like shielding or the sign of silence, or big rituals like the Rose Cross. This binding spell falls somewhere between them, and will work as long as you do it right. It also seems to have some hoodoo/shamanic inspiration.
The original inspiration was from a wiccan spell, but I have made some changes to it. I’ve realised it’s better to add things to spells according to your tradition, and that makes them work better for you. As a ceremonial magician, this to me is a Saturnine spell, so I’ve made sure to venerate him in it.

I just want to say now that this spell is NOT intended to harm the person you are binding or even restrict them, but to protect you from their negativity. Now, for those people whose life and existence hinges on being mean and negative to others, it might be hindering, but that’s not our concern, since the intent is pure. So, let’s get into it.

So, first off, you want to do this during the Waning Moon, on the Day and in the hour of Saturn. For more about timings your rituals, click here.

For this you’ll need:

Amethyst
Smokey Quartz
Black String/Rope/Ribbon
Paper/cloth, ideally black in colour
A bit of earth
A Jar/Bottle
A Sympathetic Link to the person.
Four Thieves Vinegar (this is optional. I don’t use it, but it can be used)

Now, what you need to do is make a poppet. You ever watch those bad movies about witches, where they make little voodoo dolls and tie a hair to them and use it to torture people? That doll is essentially a poppet (of course, we are not torturing). It is a symbolic representation of the person.

It does not have to be detailed, just a basic human shape. It can be made of cloth, if you’re good at stitching. I had black paper, so just cut two identical human shapes and glued them together. Make sure the head is open, because that’s how you’ll put stuff inside. Note that the main purpose of the poppet is to hold the things together. You could probably put them in a pouch or something, but the poppet will have a much stronger impact on the subconscious. 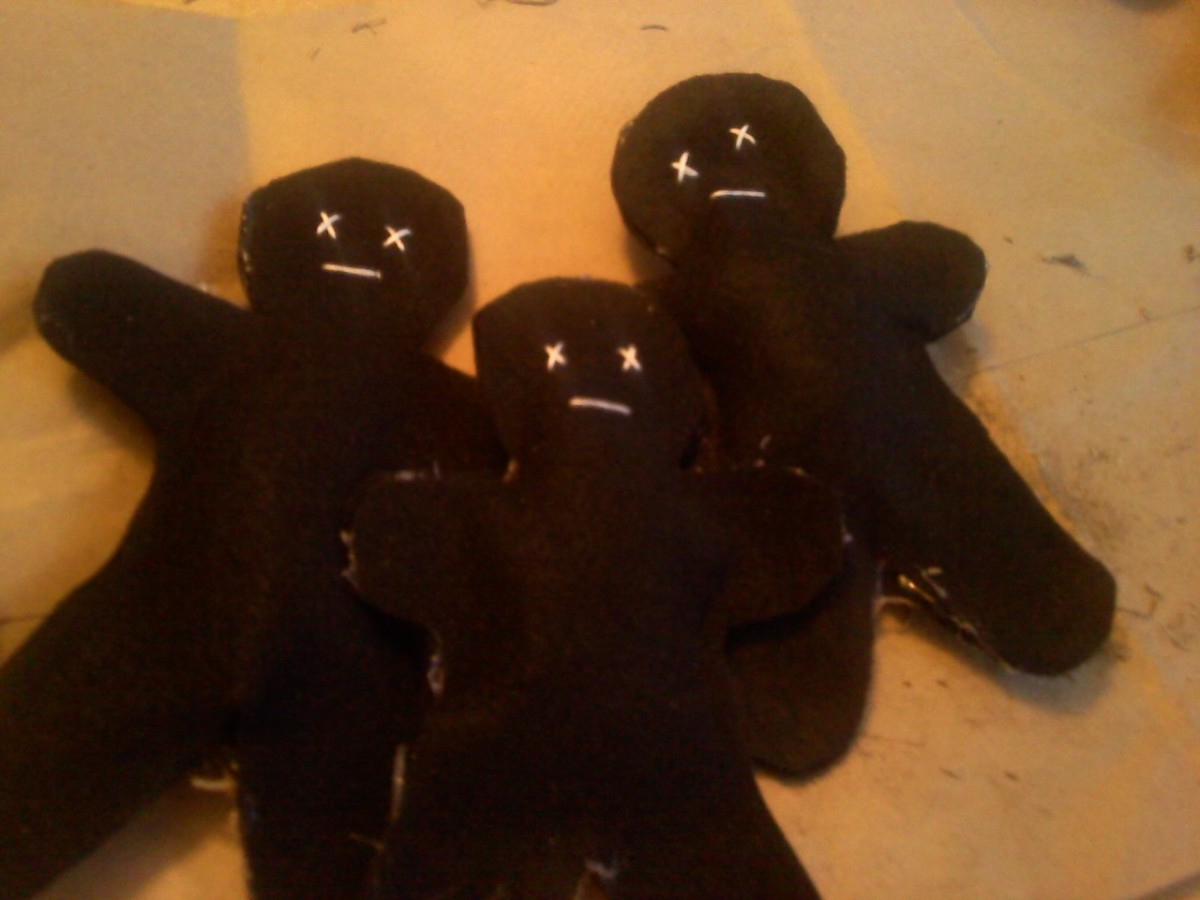 After that take your jar (I just picked a old pickle jar with a red lid) and with a black marker, draw the astrological sigil for Saturn: ♄.

You also need a sympathetic link to the person you’re binding, like a hair, or a piece of garment, or something they touched. Blood or sexual fuid would be best, in theory, but let’s be honest, that’s very difficult to obtain, so don’t even bother. Hair will work just as good as blood. (Please don’t go around asking people for their bodily fluids).

EDIT (2019): Seems people are unlikely to give hair too. I’d stay stick with articles or pictures, unless you need the spell to be very strong.

If you can’t get anything, just a picture will do. That’s pretty easy to obtain these days, with everyone face plastered all over social media.
Just make sure all the materials you’ve chosen can fit in the poppet, and that the poppet can fit in the jar.

For the spell, you want to add the amethyst and smokey quartz in the poppet: 3 pieces will do. Then, add the earth/dirt. If it’s dry and loose, please add a few drops of water it, or it tends to get messy, as we are reminded by this annoying emo rebel.

Then, add your sympathetic link, and seal the poppet. Take a pencil, and draw the Saturn sigil on the poppet. The dirt venerates Mother Earth (ruled by Saturn), the pencil drawn sigil and black colour venerates Lord Saturn. The Amethyst is for peace between you and the person, and the smokey quartz is for protection.

Now, take your string or ribbon, and from the legs, begin wrapping it around the poppet. Make sure you move the string counter clockwise, and you may chant while you do this: to the Mother and Saturn, to aid in this.

All the while, imagine this person negativity break from you and drain away. Imagine you not being controlled by this person, and imagine his/her negative energy returning to them, and leaving you forever and you being in control of yourself. Make yourself feel calm and protected. Do not think about how you hate this person, but how you want to be free of this hate. Make sure you bind the poppet completely.

“One ring to rule them all, One ring to find them, One ring to bring them all and in the darkness bind them” ~Lord of The Rings
In case you never realised, The One Ring is Saturn symbolism.

Containing of the Poppet

Ideally, you want this person out of your life, but what if you need them? When I was doing this, it was a person doing a group research with me. It was essential that we could interact at least professionally, for the duration of the project.

Often we are forced to work with someone, and can’t send them off, because we need to get shit done. So, now comes in the jar. This is an optional step, and is a way to temporarily bind just the person’s negativity towards you.

Take the jar with the Saturn symbol, and put the poppet in it, and close it tightly. Now, imagine the walls of the jar being a protective between you and the person. They can interact with you, but they are separated by this wall and cannot send you any energy. Imagine the jar to be like a shield that keeps their negativity contained and unable to harm you or them. You can chant for protection however you want.

Remember, you’re not containing the person, but their negativity. This should also help them, if they choose to let it go. If they still cling to their negativity and follow it into the jar, nothing you can do.

Next, store this jar somewhere you wont see it, and forget about it. Keep it away for the entire time you need to work with this person. You’ll find they will slowly stop their negative behavior towards you, but they’re still in your life.

EDIT (2019): I have found since the time I wrote this, that it is a rare occurrence where you actually “need” a person in your life. It usually means you are not firm in your resolve.
Ideally, I suggest skipping the jar entirely and just banishing the person’s negativity. It is what I should have done. Everything works out eventually if the intention is pure.
I am not going to remove it from this post since it does work quite well, but such methods are usually used for torture, to cause the person pain over extended periods. There’s little point in binding a person in the jar if you’re going to let them go anyway. So, do what you must, but keep my suggestion in mind.

The next step is for getting the person out of your life. So, at the end of the time period, open up the jar, pull out the poppet, and do the next step.

This is the final step for getting rid of the person. Very few people need the above step. Chances are you want this person out of your life fully. So, now that you’ve got the poppet bound, and may have put it in a jar for sometime, it’s time to banish it.

Take this poppet, and release it to the elements. There are a couple of different ways.

You have to let go, and forgive this person. That’s the only way this will work. When you dispose off the poppet, also dispose off any feeling of resentment, anger and sadness this person left you with. If they’re filled with darkness, that’s not your problem. You’re not a trash can for others to dump their negativity, and the longer you hold on to negative feeling towards them, you’re holding on to the trash they threw at you.

Some people might like to toss the entire Saturn jar into the water or bury it, but I advise against it. The glass or plastic jar is non-biodegradable. I’d much rather you just took the bare poppet and buried it or tossed it in the water, since it will decay. We don’t want to asking the Mother for a favour, and polluting her at the same time.

Besides, there was recently a case in some South American country where some guy found a glass bottle on the beach, with a picture inside that had needles stuck in it. This was obviously a curse. Who knows what the effects will be on the person who finds and opens up your jar? Be careful, the chickens always come home to roost.

If you’re releasing it into the water or burying it, you can even put the poppet in a jar of Four Thieves Vinegar. I burn it, so I did not, but yesterday I saw a video made by Uncle Birch (freakphil1309) and that’s what he said he does.
The vinegar method is his way, and i’m only mentioning it because he’s a pretty solid occultist, and a witch as well (meaning he understands spells better than me). In his version, you skip the poppet entirely and just use a picture. I’d link his video but his channel is impossible to navigate. You’ll have to search yourself 😀

Until next time
~White Raven

2 thoughts on “Spell for Binding Away Negative People”

There are Two Pillars on the Tree of Life, called the Pillars of Mercy and Severity. Between them, lies the path of magick, of moderation. This Middle Pillar, known as the Mahalingam in the East, if that which upholds the world, and connects the Root of Creation to the Crown.

This blog is dedicated to finding balance and Truth. It focuses on multiple perspectives, and is intended for practitioners from all walks of life and schools of occult philosophy.